The word “travel,” for those of you who know a Romance language, might remind you of travailler, trabajar or trabalhar. In French, Spanish, and Portuguese, respectively—“to work.” This is because, while modern travel is fabulous and non-worky, historically, it looked more like this: 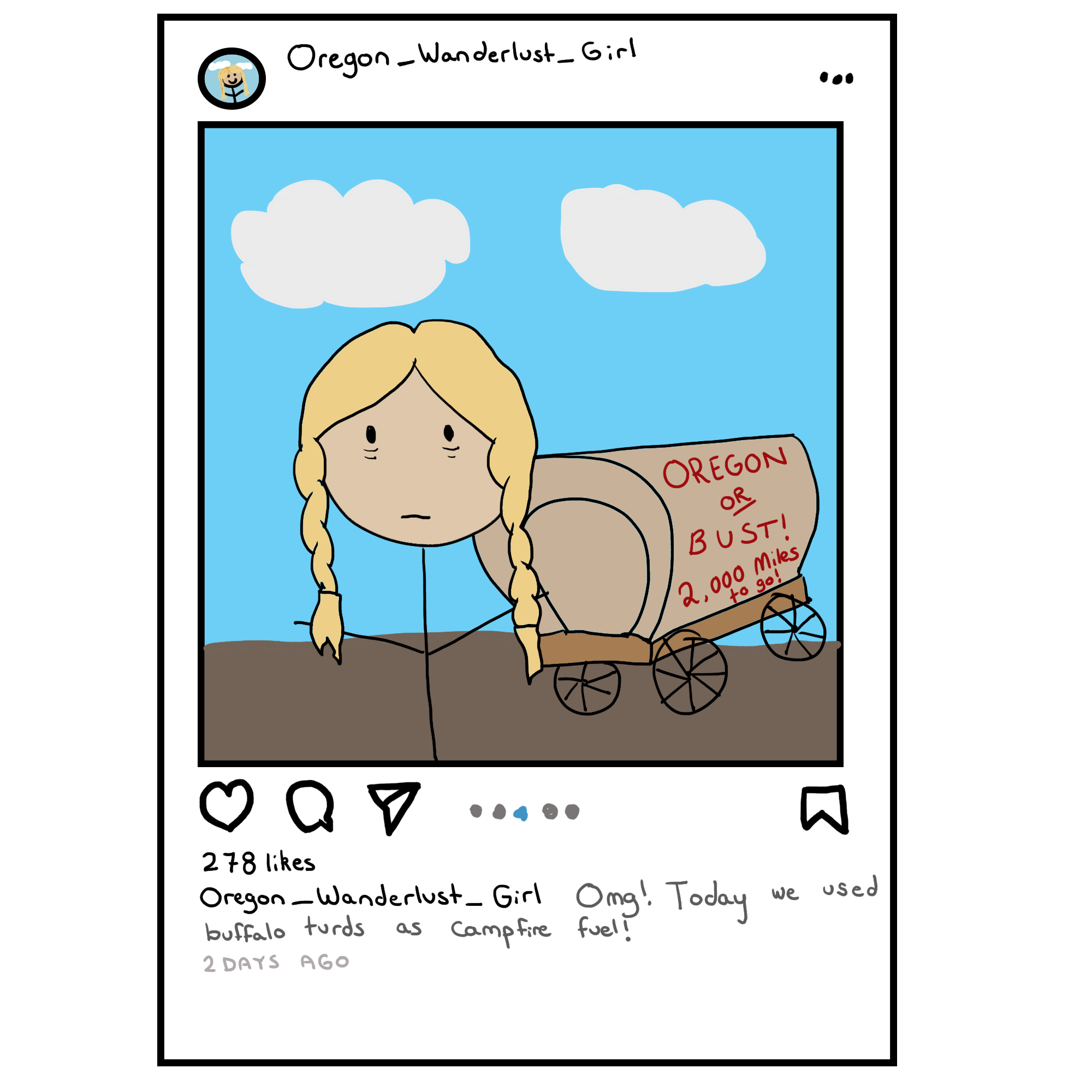 Since the travel days of yore, things have gotten more comfortable. Dysentery is just a meme!*

*It’s actually super not. Are people going to wear “You died of Coronavirus” T-shirts someday? Hmm.

I know plenty of people (myself included) have missed traveling since COVID-19 nosed its way into our lives. I also know plenty of people have rolled up their sleeves and said, “Gosh darn, I love traveling so much that I’m going to do it anyway!” I am not one of those people. I am of the camp of people who saw the pandemic and turned into a burrowing owl, living under a nest of protective blankets and scrubby grassland.

“Well then,” you’re saying, “this is a terribly misleading post title, isn’t it?”

No! Because although I am a burrowing owl at heart, I got on a 15-hour flight across the world. And this is my story.

Once upon a time (that time being July 2020), my Australian dating friend got a job back home in Melbourne. Australia has largely restricted the number of people who can enter the country. Not sure what the big deal is. I mean, like, sure, they only have 25,000 COVID-19 cases, and sure, the United States has 6 million, but if you round to the nearest 20 million, we have the same number of cases. So. Checkmate.

Anyway, I very much wanted to join my dating friend in Australia, so I applied for a travel exemption. It went something like this: 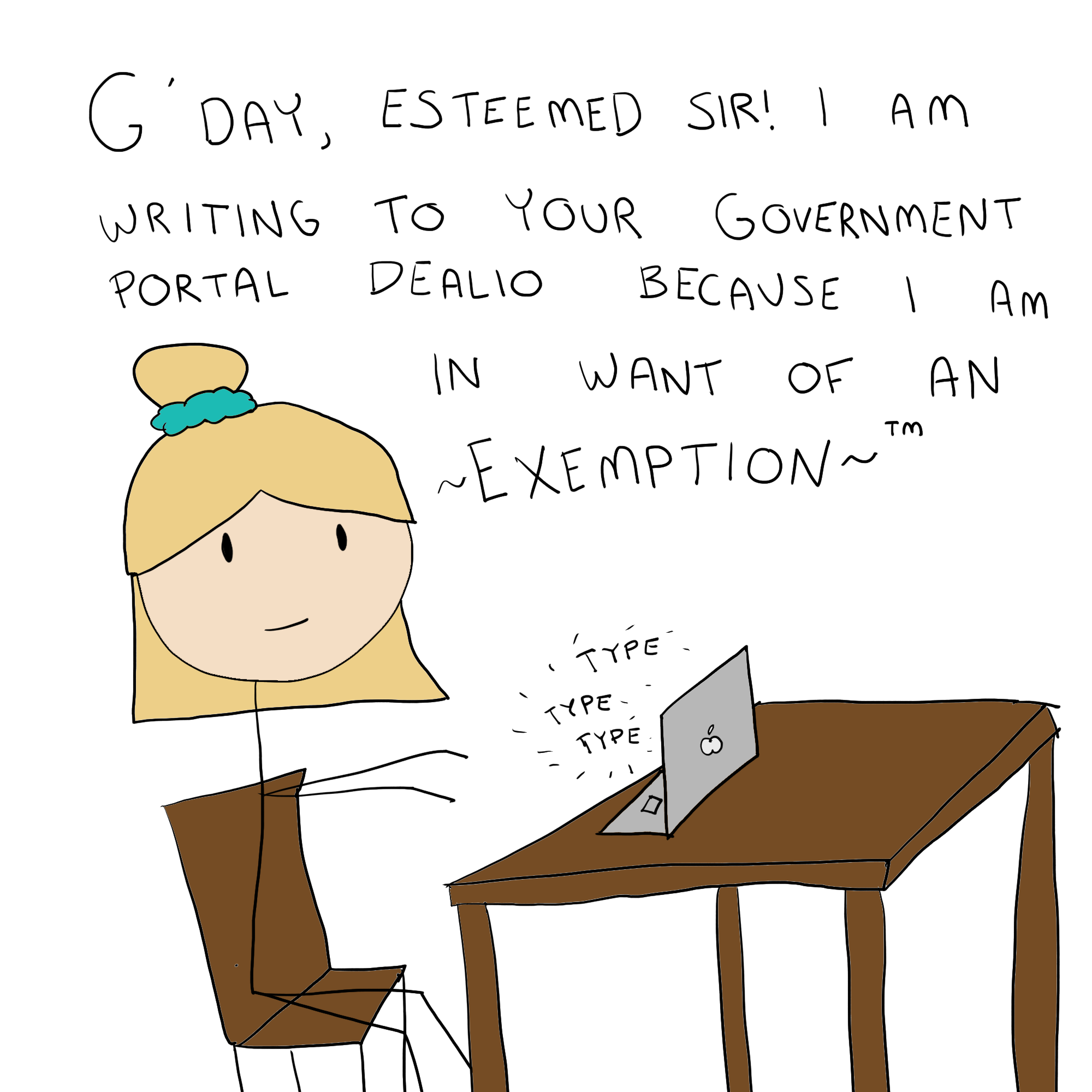 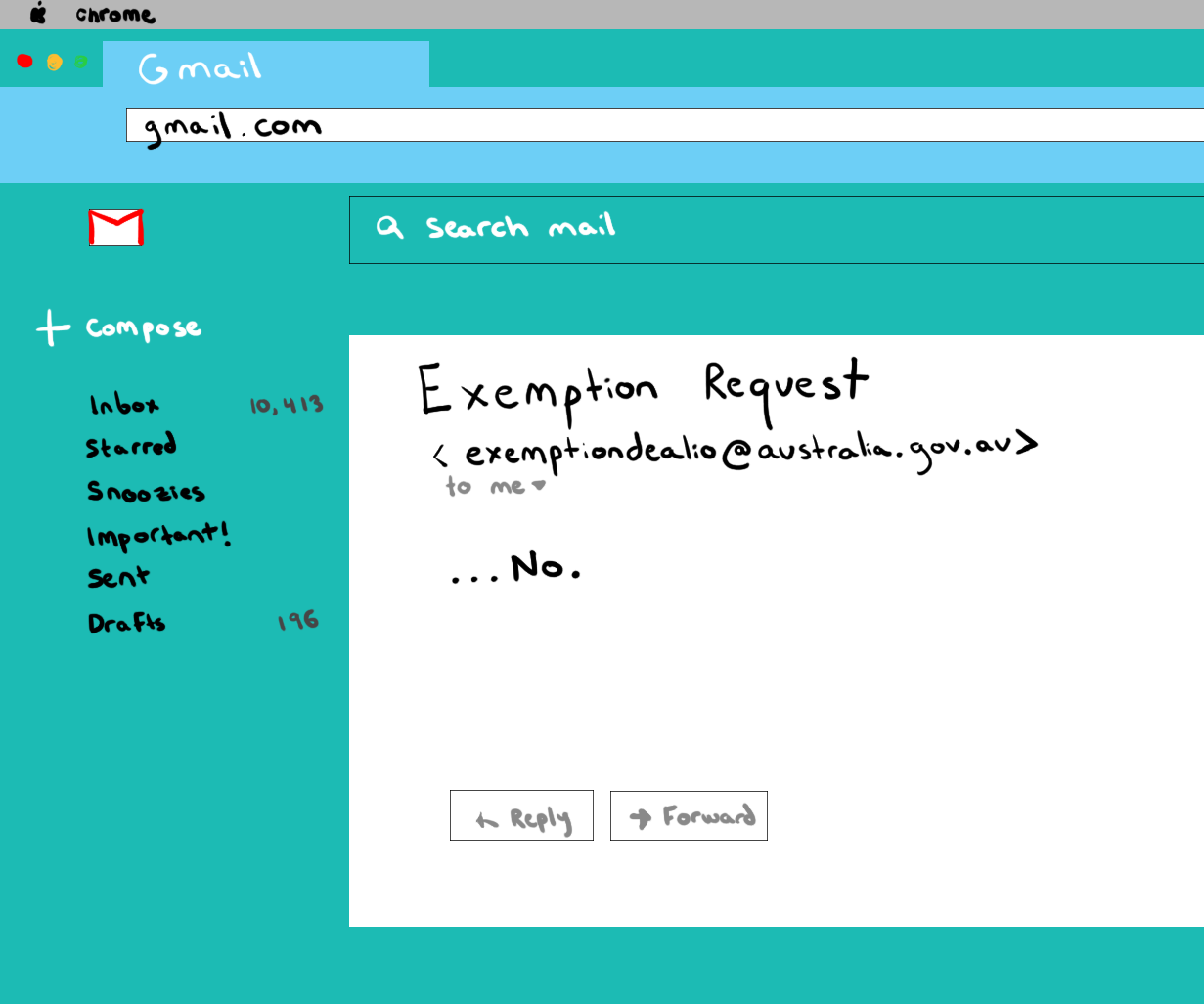 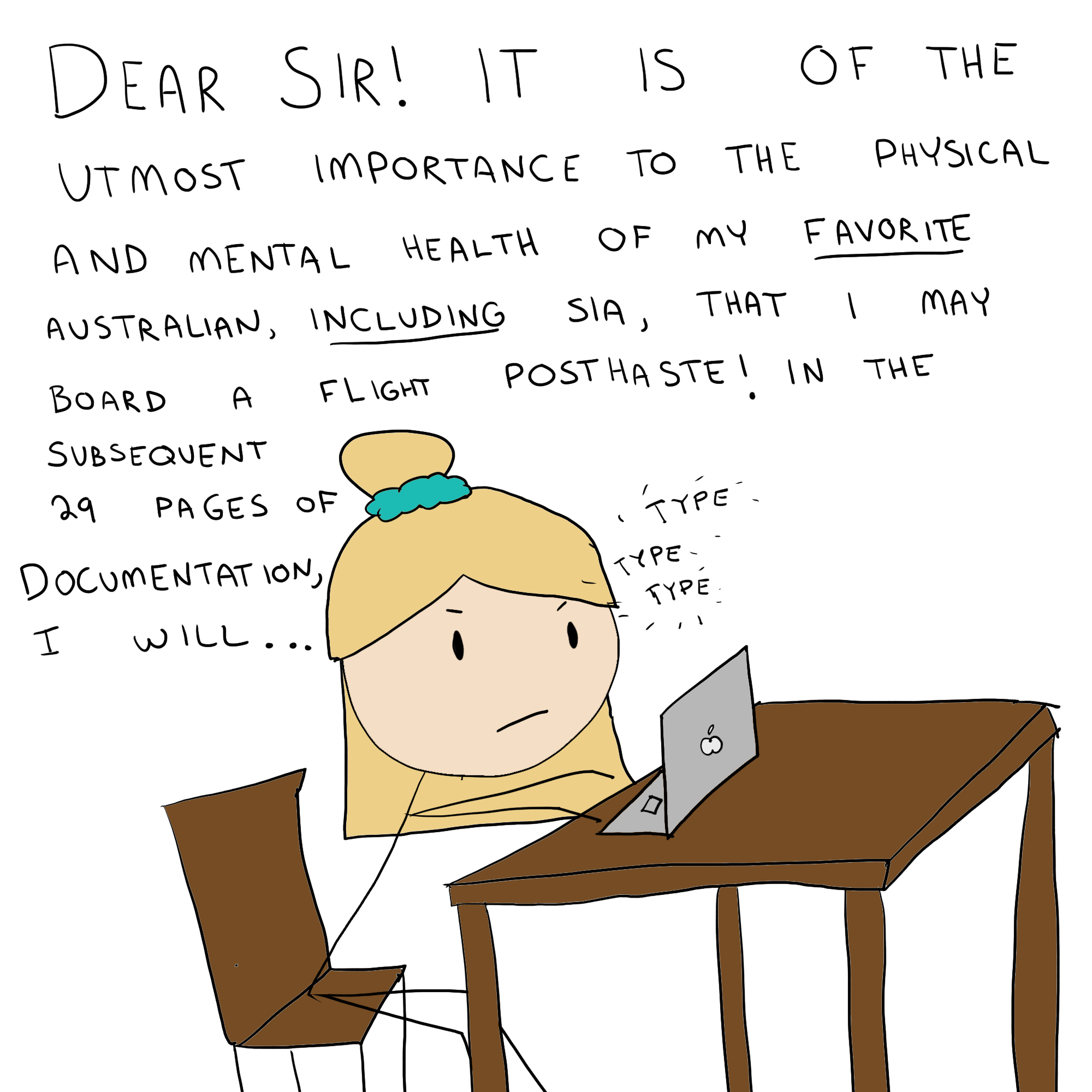 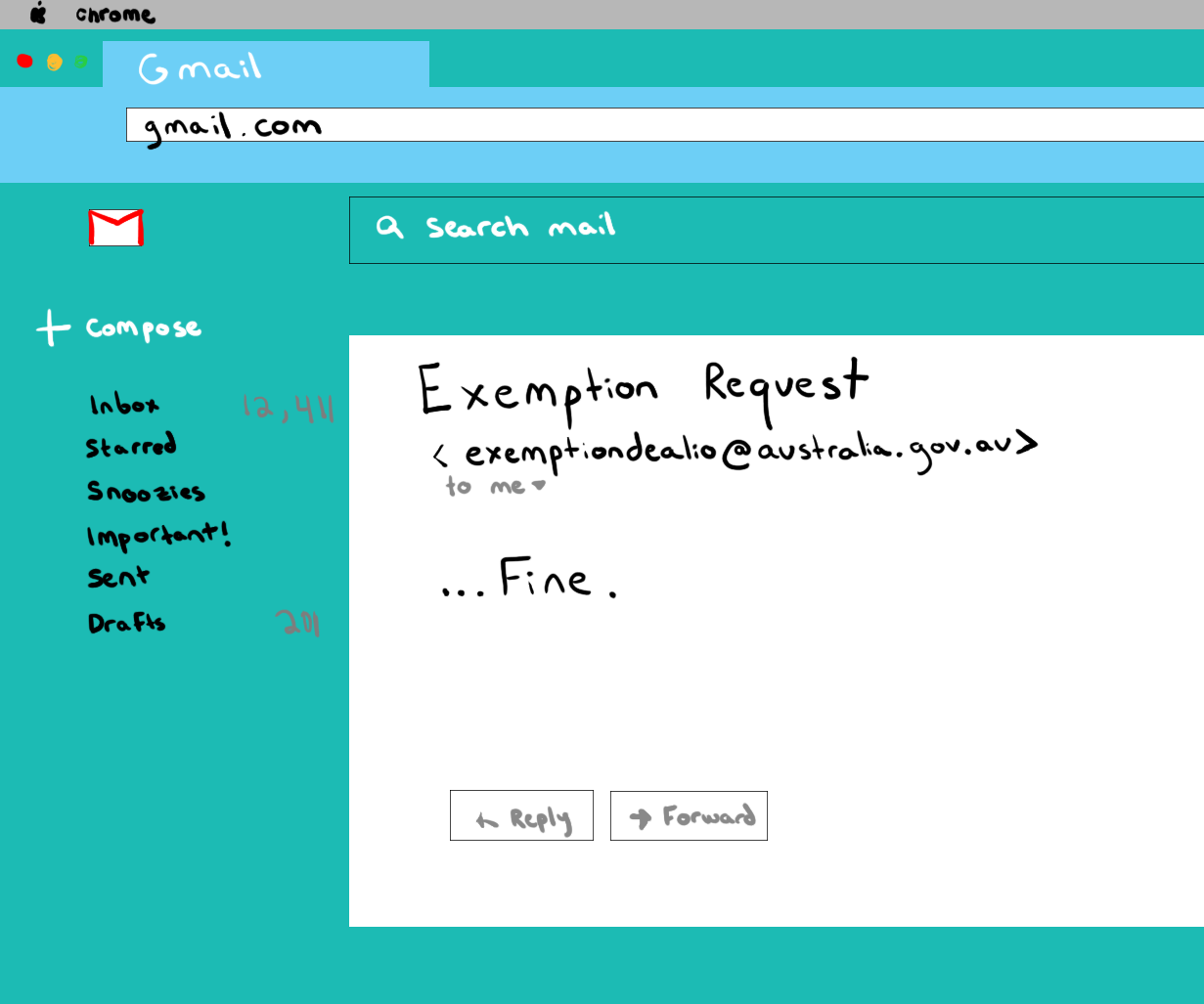 And thus, I packed my bags to go to Australia.

The day of the flight arrived. If you haven’t been to SFO since the pandemic started, I can’t say I recommend it. For starters, everyone is drifting around with vague terror in their eyes, shrinking away from forceful gusts of air. You’ll see families in hazmat suits–grown-up hazmat suits, lil’ baby hazmat suits, probably a purse-dog hazmat suit somewhere–and lots of masks. Also lots of people wearing their masks incorrectly, which somehow manages to feel even more dystopian.

Another problem is that most people wandering around SFO in August of 2020 are not there for a quick jaunt to an island getaway. People are probably there because:

1) Some sort of emergency requires them to travel.

So everyone looks vaguely panicked, and everyone has a lot of luggage. As it turns out, the best way to move two lives’ worth of luggage across an airport without making the TSA flag you as a bag-abandoning terrorist is to herd your luggage in batches, like sheep, shoving the bags with the strongest wheels ten feet in front of you and nudging the rest along in their wake with any available limbs. It is not very elegant, but it is also not very effective. 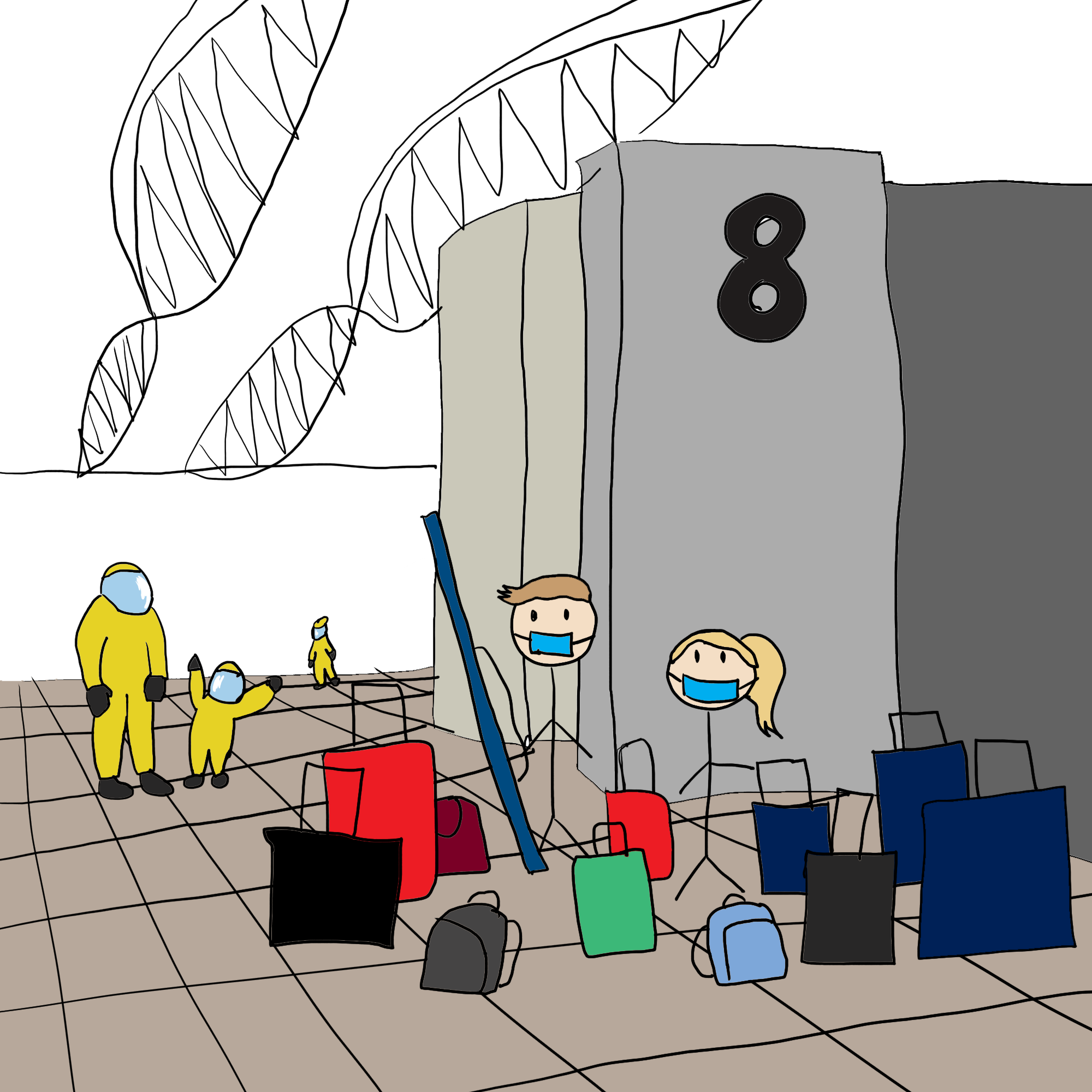 Finally, you get to the check-in counter, where the man at the United desk begs you to get off this overbooked flight.

“The Australian government is only allowing 30 people in per flight,” the man says, his nose dangling out of his mask, “and we are very overbooked.”

“Well,” you say, “perhaps you shouldn’t have booked more than 30 people on the flight in the middle of a pandemic when the only people traveling are dealing with some sort of emergency and/or an international move.”

“Got me there!” the man says. “Anyway, feel free to go to the gate, but there’s a fifteen percent chance you’ll get kicked off at the boarding area. Ta!”

When we got to the boarding area, we did a quick survey. Lots of families. People looking sad and scared. Everyone was nervous to get kicked off and placed on a flight five days later. We didn’t know if we’d even be allowed on that one. Five of the 35 of us in the boarding area wouldn’t be getting on the plane, even though our bags had already been checked. So we all sat, waiting, as the people at the United desk “randomly” selected five names off the list. Those people are sent to get their bags and come back later.

This is a terrible situation for so many people involved. The people getting kicked off have it worst. And the people sitting there, waiting in fear of getting kicked off, aren’t doing too hot, either. Even the people at the United desk have a terrible go of it, because it’s not their fault. No, the only people I actually blame here are the higher-ups at United who decided to keep overbooking flights during the pandemic. To them, I wish a week of unbroken hiccups.

But the dating friend and I got lucky! We got on the plane. Then we settled in for a flight on a mostly empty 787 Dreamliner. (Here, dating friend says, “Want to know the exact model and information?” Reader, I’m going to level with you. I know very little about planes. I’m still not convinced they don’t flap their wings when I’m not looking. For any further information about our aircraft, please do not consult me.)

Anyway, if you’ve ever been on a 15-hour flight before, you’ll know it goes something like this: 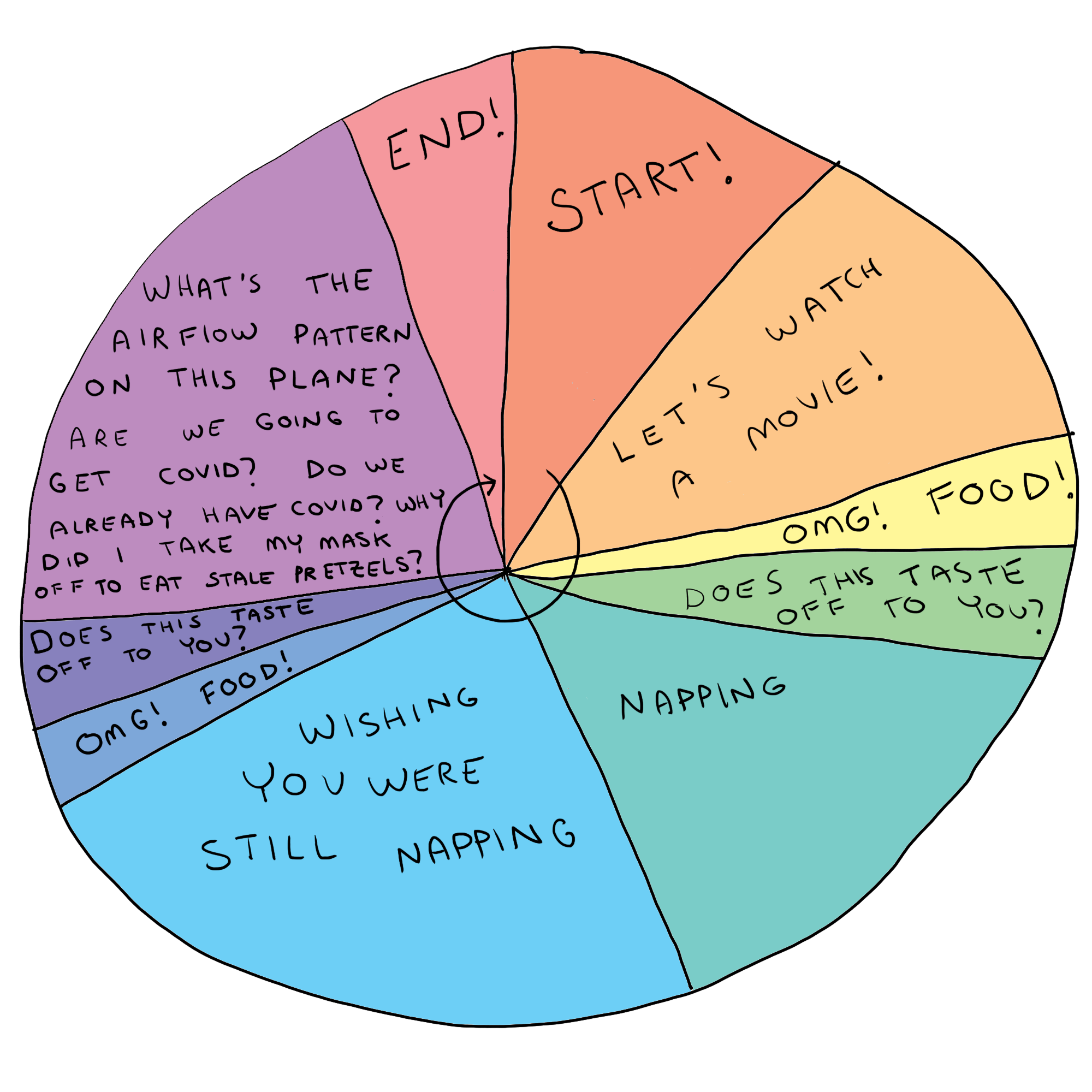 We landed in Sydney at what felt like 3 in the morning. We then had to wait for a Singapore Airlines flight to clear before we could deplane–if someone sick was on one of the two flights, they didn’t want us to infect each other. So, you know, comforting thoughts as we stepped into Sydney.

The airport was deserted, except for the 30 of us, health workers in scrubs, and members of the Defense Defence Force. They COVID screened us, sent us through customs, made sure my exemption was legit, and sorted us into two busses. One bus for people traveling with kids, one bus for people without. By the time we got to the hotel, finished talking to the Defense Defence Force men, and got to our room, it was 5 AM in San Francisco.

When I woke up in the morning, I was able to assess the situation with a bit more clarity. 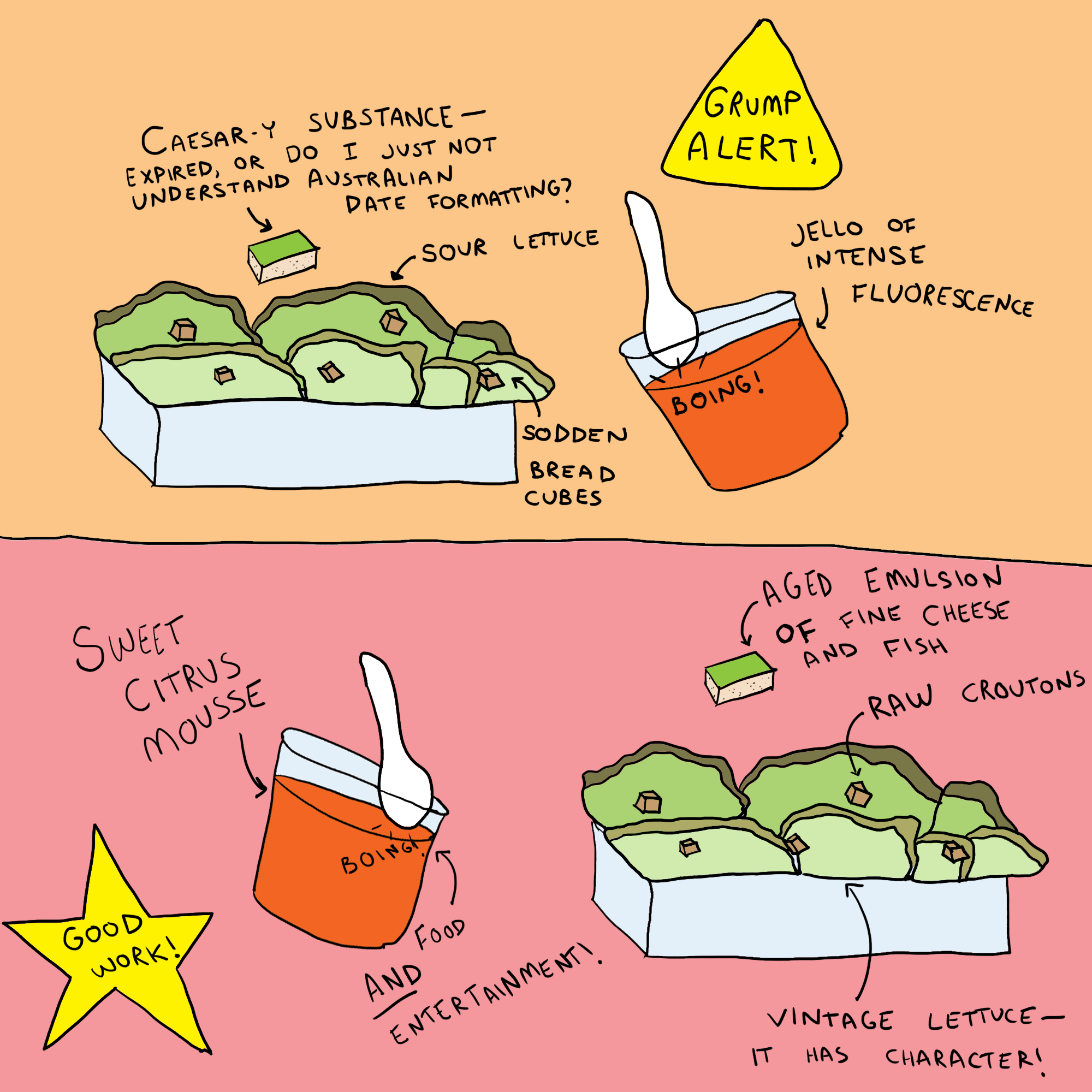 The biggest improvement to our health and well-being came when we realized that we could, in fact, exercise, despite being stuck inside. As it turns out, walking is a good idea even if you have absolutely nowhere to walk. So we walked. A lot. We took our inspiration from David Sedaris, whose bibliography the dating friend was working through while in the hotel. Sedaris, whose competitive Fitbitting displays an athletic tenacity we should all strive for, walks 130 miles a week. And so too would we.

We fell short of our goal. Dramatically. Whenever we started racking up miles, we were interrupted by a pleasant knock at our door, a cheery voice telling us dinner was here. Call it Pavlovian conditioning. Call it Stockholm Syndrome. Without fail, we were delighted to throw open our door and examine our paper bag of food, no matter how many times it disappointed us.

Still, we did manage to take a few long walks, even if we never reached Sedarian step counts. 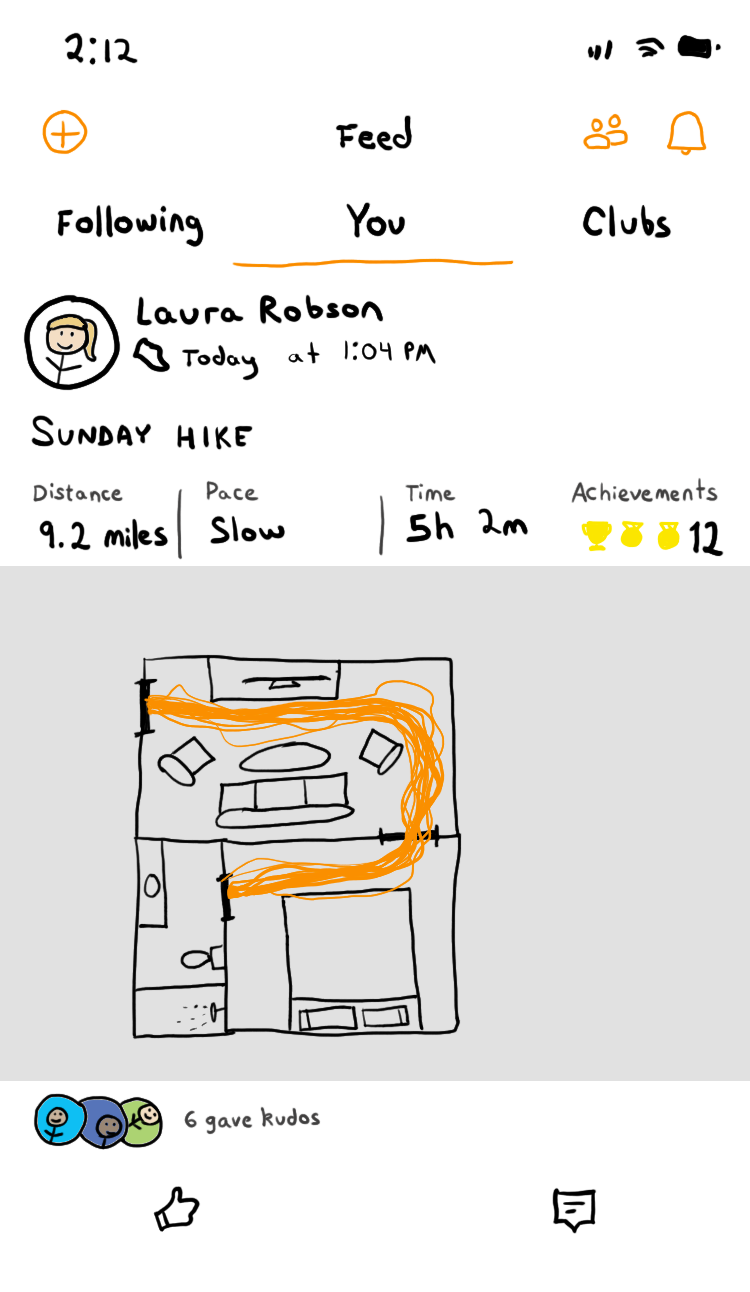 When the pandemic started, I think we all had lofty goals about bettering ourselves. Learn to cook! Get in the best shape of my life! Acquire hobbies™! We all made our plans. We all dreamed of the future. And together, we all failed. So much has divided us in 2020. And this–this brought us together. As one, we all realized that we were not going to better ourselves. We were going to end this year as we lived it: anxious and vaguely nauseated.

You would think, after going through this process a few months ago, I wouldn’t have begun hotel quarantine with any goals whatsoever. You would be wrong.

I did accomplish the exciting and government-mandated two COVID-19 tests, which was satisfying. If you haven’t yet had the privilege–please, allow me to illuminate you, as I am now a connoisseur:

1. A nurse with a distinctly non-American accent knocks on your hotel door. Is she Irish, or are you just very bad at discerning Australian accents? Dating friend confirms she is Irish. Why have all your nurses been Irish so far?

2. The chipper nurse takes your temperature. She says a number in Celsius, and you nod, as though you are confident you’ve done well. This is a ruse. You do not know Celsius. As far as you know, she has just declared that your body is 70 degrees Fahrenheit and resoundingly dead.

3. She takes a long swab and sticks it down your throat. It burns deep inside you. You briefly wonder if this test is giving you coronavirus.

4. The nurse tells you the nasal swab is next. You wait for her to get rid of your throat swab. “Nope, same swab!” she says, chipper as ever. You watch your phlegm quavering on the end of the swab as it approaches. The nurse proceeds to shove the swab so far up your nose that you are quite confident she’s taken a sample of your amygdala.

5. She does the other nostril, which is worse, because now you’re clenching.

6. You spend the rest of the day feeling like you just did the worst flip turn of your life. Water and phlegm have gone so far up your skull that you are now one with the phlegm. Your eyes won’t stop watering. You assure your dating friend you aren’t crying. He gives your head a sympathetic pat.

And so it went for fourteen days.

As it turns out, fourteen days leaves the linguistically-inclined among us a lot of time to surf etymonline.com for fun facts. Apparently, the word “quarantine” originally comes from the Italian phrase quaranta giorni–“forty days,” which was how long ships were kept in isolation upon arrival in Venice during the height of the Bubonic plague. About 150 years later, the English used the word to describe “the period of 40 days in which a widow has the right to remain in her dead husband’s house.” So basically, quarantining in the 1300s looked like this: 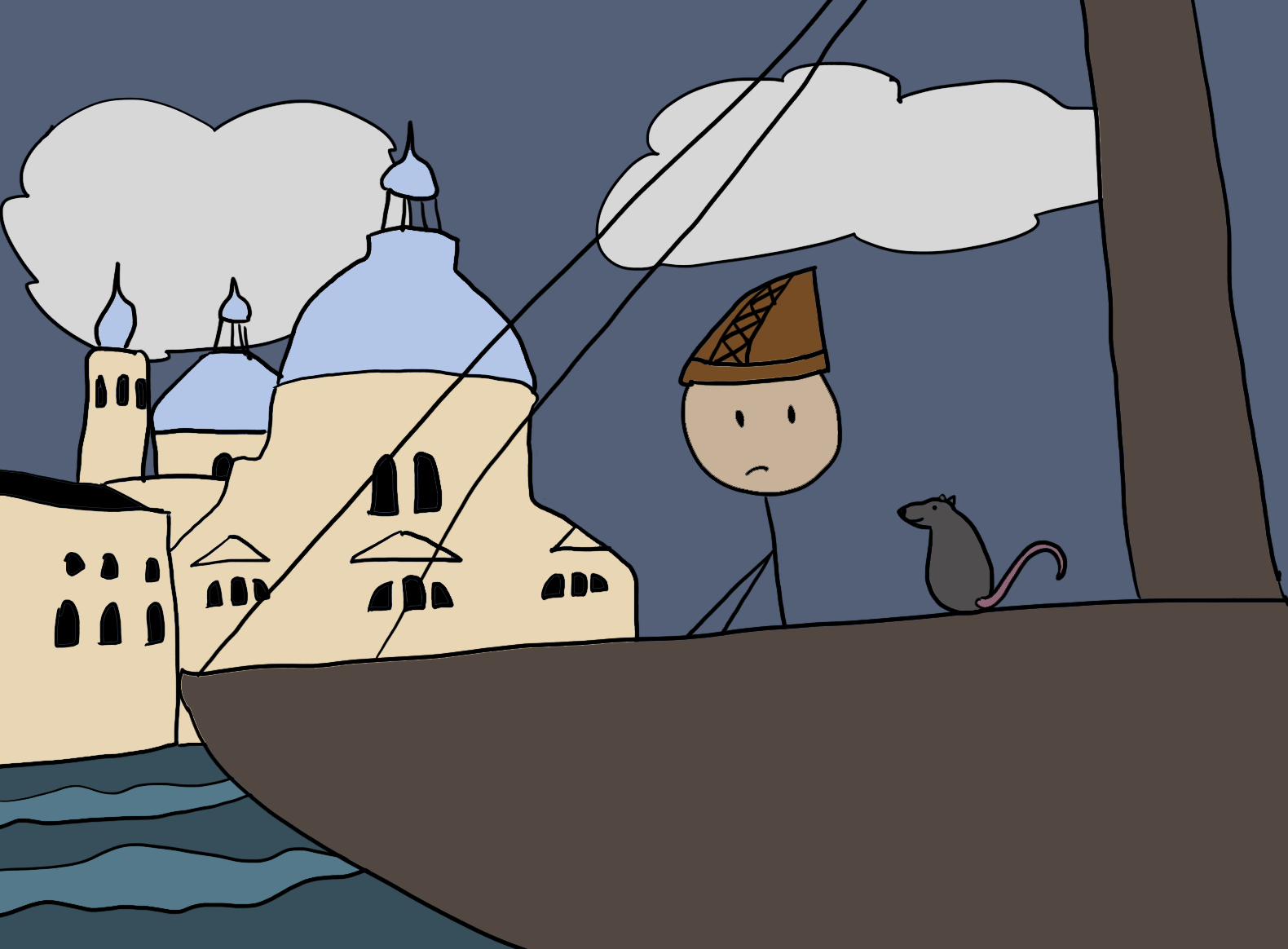 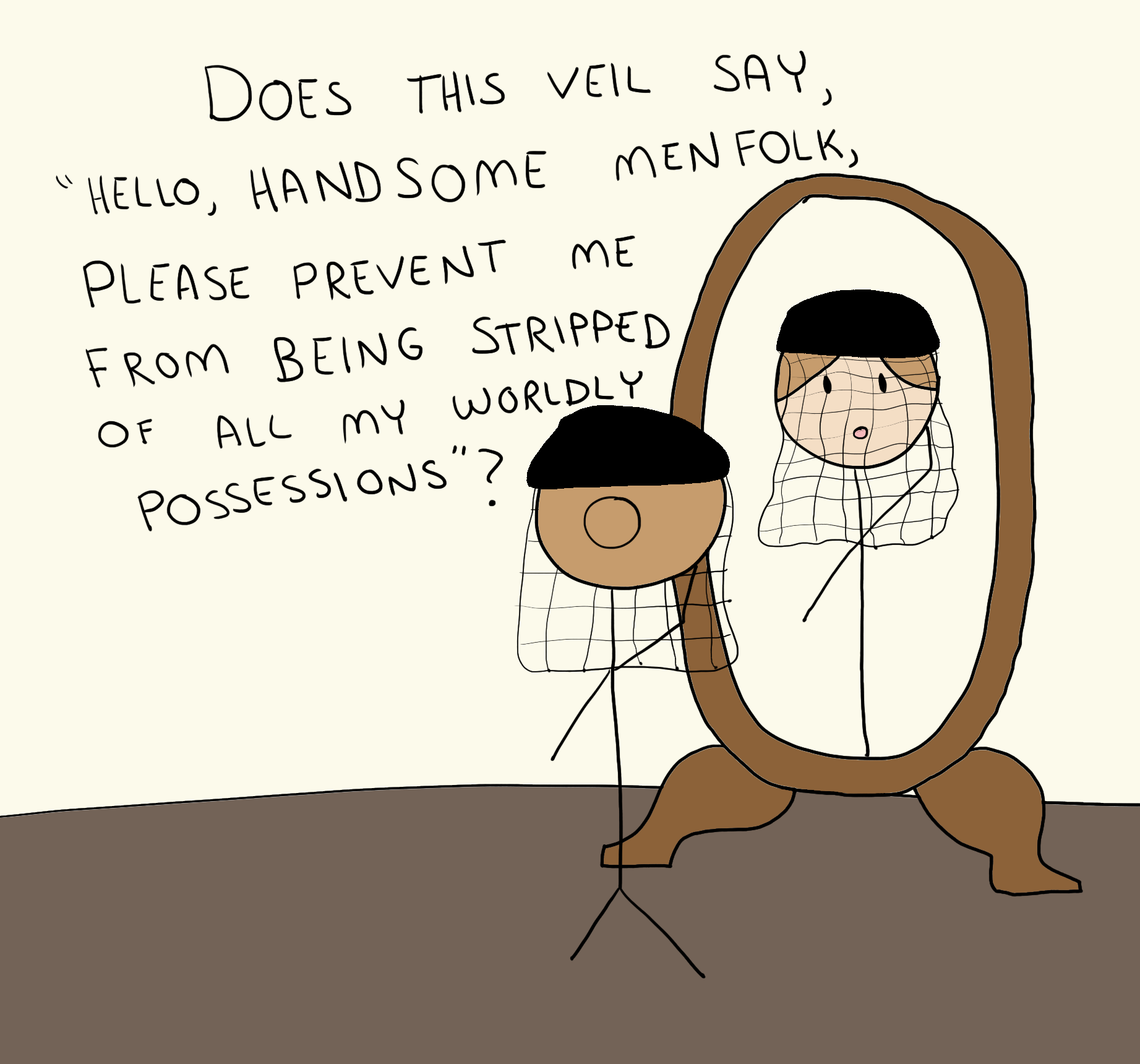 So you know what? I guess I’ll take the hotel.

I'm Laura, and I write YA books.

Thank you for subscribing.

We respect your privacy and take protecting it seriously.